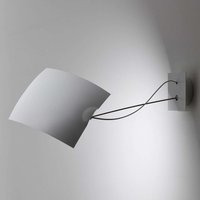 Dimmable LED designer wall light 18 x 18 in white A sail-shaped lampshade made of powder-coated aluminium, a delicate connection rod made of stainless…. 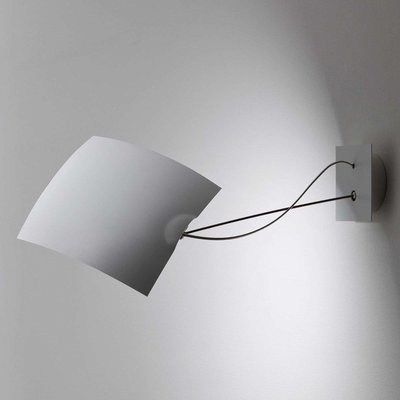 Dimmable LED designer wall light 18 x 18 in white A sail-shaped lampshade made of powder-coated aluminium, a delicate connection rod made of stainless steel and a striking mount – that is the LED wall light 18 x 18 which got its name from its 18 cm long and 18 cm wide lampshade. The hallmark of the light source is this very lampshade whose gently curved design makes the light appear almost weightless. Like a thin sheet of paper, 18 x 18 appears to literally float through the room and to distribute its even light in a way which could not be more elegant. Two joints at both ends of the connection rod allow you to align the light, which can be installed either on the wall or on the ceiling, completely flexibly. Whether it is used as a solitary light or in a group of several lights, 18 x 18 impresses with its individual character in both private and public premises. The LED light source is well concealed behind the aluminium sail. The sail is not only the visual design feature of 18 x 18, but also serves as a diffuser for the light which is distributed evenly in the environment, without glare. 18 x 18 can be seamlessly dimmed using a trailing edge dimmer (not included). Energy efficiency class:A+
BUY NOW at Lights.co.uk*