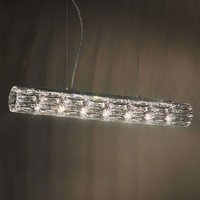 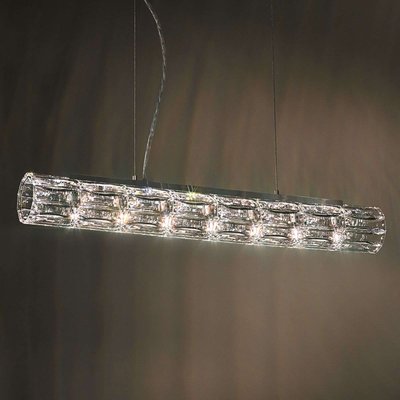 Verve hanging light with diffuser completely made of crystals While other light fittings have a dull, conventional lampshade, the Verve hanging light has a lampshade (or rather diffuser) entirely made of crystals. The elongated, precisely cut crystals are placed side by side and are shaped as a whole in the form of a tube with seven G9 light bulbs for lighting dining rooms, etc. The halogen light naturally has a warm white, cosy light whose light effect is positively influenced by the crystals through which it passes. The crystals refract the light beams, so that a beautiful lighting effect is created on the wall and ceiling and a tremendously sparkling light is spread all throughout the room. The founding of the world-famous crystal manufacturer Swarovski dates back to 1895 when Daniel Swarovski, the company’s founder, found the perfect location for his new glass cutting shop in the Tyrolean town of Wattens. He developed a new method of glass cutting that allowed for the machine production of artfully cut crystals. The characteristic Swarovski crystals are used today not only in the fashion and jewellery industry, but are also used in the manufacture of lights. Energy efficiency class:A++
BUY NOW at Lights.co.uk*