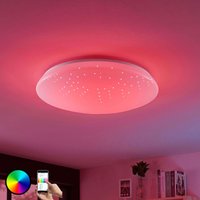 Round Jelka LED ceiling lamp with an RGBW colour change function and WiZ technology, which can be controlled by an app or a remote control The Jelka L…. 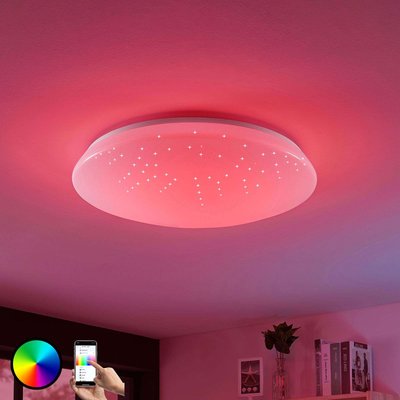 Round Jelka LED ceiling lamp with an RGBW colour change function and WiZ technology, which can be controlled by an app or a remote control The Jelka LED ceiling light is a round LED ceiling light made of white plastic. It has countless microholes on its lampshade, which provide a sparkling effect and produce the so-called starlight effect. The light has a lot to offer besides this attractive feature. It comes with innovative WiZ technology, which can be controlled by an app (available for iOS and Android) or by the included remote control. The result is a high functionality. You can not only choose between various tones of white, but can also use the coloured light function, which has access to millions of colours, allowing you to look more closely at the positive effect that these can have on your general condition and well-being. Red, for example, stands for vitality and energy, orange and yellow are colours that cheer people up and lift their moods, whilst shades of blue and green soothe and bring harmony, to name just a few of the advantages offered by coloured light. Jelka has a high basic level of brightness, but can also be dimmed in a few steps by an app or a remote control. In addition, the voice control systems Google Home, Amazon Alexa and Apple HomeKit are compatible with the WiZ system, and lovers of sophisticated smart home technology are sure to be pleased that they can easily control the different colour scenarios with their voice. Technical data / compatibility – With WiZ technology – Control by the WiZ app (for iOS and Android) or remote control (incl.) possible – Voice control possible, compatibility with Amazon Alexa, Google Home and Apple HomeKit – Colour selection from 16 million colours and different tones of white – Creation of light schedules and colour scenarios – Dimming without an additional installation – No hub necessary, functions via WiFi Energy efficiency class:A+
BUY NOW at Lights.co.uk*