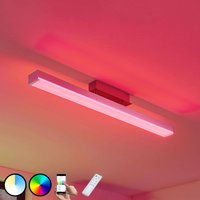 Angular Keyan RGBW LED ceiling lamp with WiZ technology for adjusting the luminous colour and the brightness The Keyan LED ceiling light consists of a…. 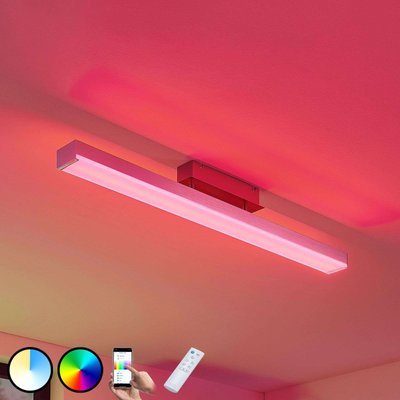 Angular Keyan RGBW LED ceiling lamp with WiZ technology for adjusting the luminous colour and the brightness The Keyan LED ceiling light consists of a white plastic diffuser and an angular metal frame with a matt nickel finish. It has a very puristic appearance and can be combined with a number of reduced interiors with a modern character. Its appearance is not the only aspect of the light that is worth emphasising, however. Its technology is also a real highlight, as it comes with smart WiZ technology, which allows you to control the luminous colour and the brightness. These functions can be controlled either by the included remote control or – for lovers of modern technology – by an app on your smartphone, which is available not only for Android, but also for iOS. And if you do not want to pick up your mobile phone to set the light according to your individual wishes, you also have the option of using an intelligent voice control system, such as Amazon Alexa Google Home or Apple HomeKit. In addition to bright RGB colours, you can also select various tones of white. The multicoloured colours not only produce a customised ambience, but can also have an influence on people’s mental well-being in the form of a soothing and harmonising effect or an uplifting and energising effect. Tackling the theories of colour psychology is definitely worth it. Technical data / compatibility – With WiZ technology – Control by the WiZ app (for iOS and Android) or remote control (incl.) possible – Voice control possible, compatibility with Amazon Alexa, Google Home and Apple HomeKit – Colour selection from 16 million colours and different tones of white – Creation of light schedules and colour scenarios – Dimming without an additional installation – No hub necessary, functions via WiFi Energy efficiency class:A+
BUY NOW at Lights.co.uk*