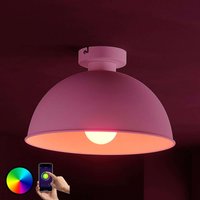 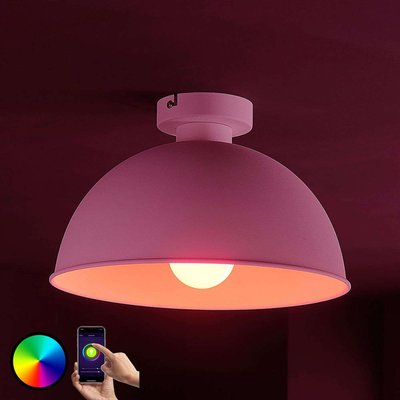 Dome-shaped Bowl LED ceiling light in white, with app-controlled RGB bulb Bowl looks great with modern furnishings. It is a white LED ceiling light with a dome-shaped metal lampshade. The light comes with an LED bulb with RGB technology. It can be controlled via an app (KAFO). The inside of the lampshade produces stunning coloured reflections. The app is available for both iOS and Android and has been designed for WiFi use. The smart RGB LED bulb can shine in a wide range of colours and can also be dimmed as required. The LED ceiling lamp can be controlled by mobile phone using the app, but it is also compatible with Amazon Alexa and Google Home for voice control. Features / Compatibility: – LED bulb can be controlled via KAFO app (available for iOS and Android) – App compatible with Google Home and Amazon Alexa – Choose between lots of RGB colours – Can be dimmed via the app – Uses WiFi network (WiFi-based app) Energy efficiency class:A+
BUY NOW at Lights.co.uk*