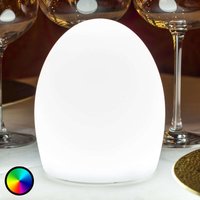 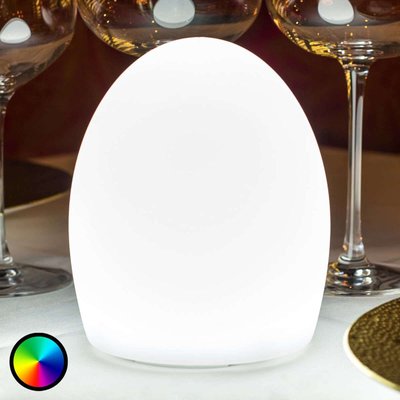 Point – battery-powered LED decorative light with controllable lighting Point is a battery-powered LED decorative light which is particularly popular in the food service sector and can, for example, be found as a bar light on AIDA ships. Due to its battery operation, there is no cable disrupting its appearance and it can be positioned wherever you want, independently of a power point. In the body of the light, there is a lighting unit, the so-called BulbLite, which can be controlled from a smartphone or tablet, as well as by manual operation via the control button in the base. White LEDs and RGB LEDs are installed in the lighting unit, allowing different lighting options. When it is set manually via the switch in the base, there is a choice between seven luminous colours and three lighting modes. There is a much wider range of options when the light is controlled by an app. The Smart & Green app is available free of charge for Android and IOS and allows the light to be controlled via a Bluetooth connection in numerous luminous colours, scenarios, colour changes etc. An inductive charging station, to which you simply have to attach the light to charge it, is included with the LED decorative light Point. The charging time is a maximum of six hours, whilst the maximum lighting duration is up to ten hours, depending on the selected setting. Energy efficiency class:A+
BUY NOW at Lights.co.uk*