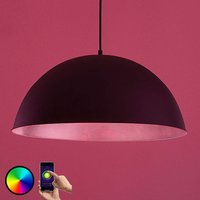 Black Bowl LED pendant light with matt silver lampshade interior and app-controlled RGB bulb Bowl has a metal lampshade with a black exterior and a si…. 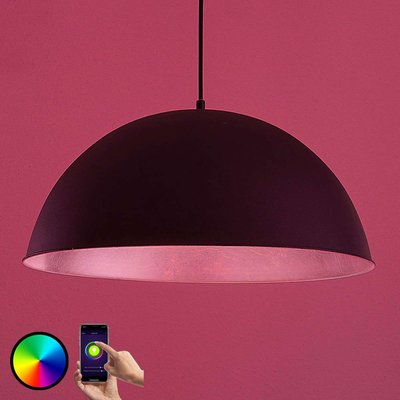 Black Bowl LED pendant light with matt silver lampshade interior and app-controlled RGB bulb Bowl has a metal lampshade with a black exterior and a silver interior. This combination looks modern and helps to provide a harmonious colour contrast. The light effect also benefits from the matt silver colour, which effectively reflects the light, especially when it has been set to shine in a bright colour using the app. The included E27 LED bulb can, as has already been mentioned, shine in colours other than warm white thanks to the integrated modern RGB technology. The colour change function is controlled via a WiFi-based app (KAFO), which is available for both Android and iOS. It is also possible to use modern voice control systems to control the Bowl pendant light: the light is compatible with both Amazon Alexa and Google Home. Features / Compatibility: – LED bulb can be controlled via KAFO app (available for iOS and Android) – App compatible with Google Home and Amazon Alexa – Choose between lots of RGB colours – Can be dimmed via the app – Uses WiFi network (WiFi-based app) Energy efficiency class:A++
BUY NOW at Lights.co.uk*