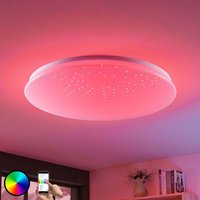 Round Marlie RGBW LED ceiling light with a white plastic lampshade and WiZ smart home technology With its simple round, white appearance, Marlie is a …. 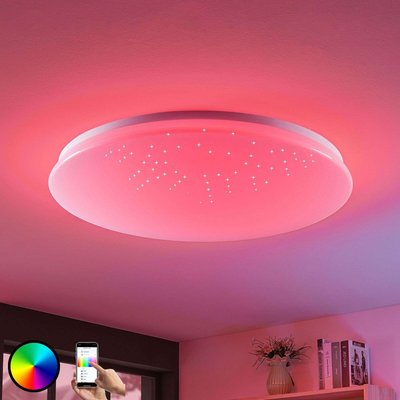 Round Marlie RGBW LED ceiling light with a white plastic lampshade and WiZ smart home technology With its simple round, white appearance, Marlie is a real all-rounder which can be used in private rooms and in a commercial environment. Little dots on the lampshade produce a starlight effect, making the light sparkle and look glamorous. The LED ceiling lamp also scores points with state-of-the-art LED technology. This makes colourful luminous colours possible, as well as allowing an adjustment of the tones of white between warm white, cool white and daylight. This enables you to produce a light that is perfect for working and alternatively to provide a cosier light with a warmer touch in the evening. The LEDs have an extraordinarily high light output, which can also be dimmed. A remote control is included for controlling the various colour and lighting functions. The WiZ technology can also be controlled by an app, which can be downloaded for iOS or Android. The well-known voice control systems Apple HomeKit, Google Home and Amazon Alexa are also compatible with the app and the functions of the LED ceiling light. Technical data / compatibility – With WiZ technology – Control by the WiZ app (for iOS and Android) or remote control (incl.) possible – Voice control possible, compatibility with Amazon Alexa, Google Home and Apple HomeKit – Colour selection from 16 million colours and different tones of white – Creation of light schedules and colour scenarios – Dimming without an additional installation – No hub necessary, functions via WiFi Energy efficiency class:A+
BUY NOW at Lights.co.uk*