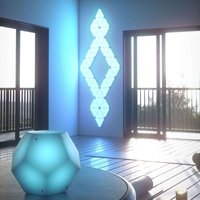 Anyone can be ordinary – Nanoleaf designer control cube for light panels and HomeKit products Even its external appearance has nothing in common with …. 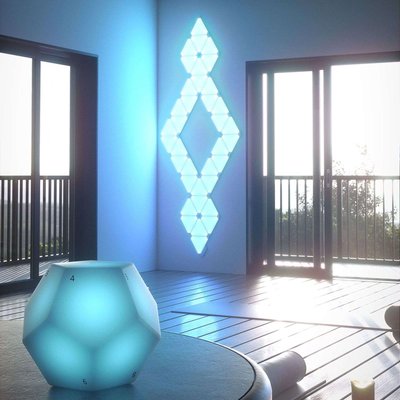 Anyone can be ordinary – Nanoleaf designer control cube for light panels and HomeKit products Even its external appearance has nothing in common with an ordinary remote control – the Nanoleaf remote is a dodecahedron i.e. a body with twelve surfaces. Compact and stylish at the same time, this cube-like body controls the Nanoleaf Light Panels – successor to Aurora – in a spectacular way. All you need to do is rotate, tilt or pivot the remote control. The integrated motion and tilt sensor automatically recognises the selected side. It provides feedback through touch (vibration) and visually via light reflections as to which of the twelve settings is selected, which it then starts. The different functions and actions can be very precisely defined in the Nanoleaf app. It is very easy to dim the LED panel by turning the remote control to the right or the left. The Nanoleaf remote can do more than just control the light panels. It is compatible with the Apple HomeKit and can be used to control HomeKit-compatible devices. The remote control can be connected to the Rhythm module of the Nanoleaf Light Panels or to the Apple TV via Bluetooth. This means that HomeKit scenes and the lighting functions of the Nanoleaf Light Panels can be programmed on the twelve sides of the dodecahedron. Functions / compatibility: – Requires the Nanoleaf Rhythm module to control the light panels (when used with Android 5.01 and higher) – Requires Apple TV or Apple iPad as the host for the HomeKit functions (at least iOS 8 or higher) – Power supply: 2 x AA batteries (included) – Wireless standard: 4.0 (Bluetooth Smart)
BUY NOW at Lights.co.uk*