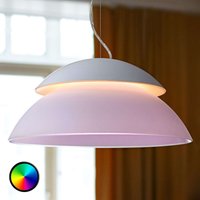 A stylish eye-catcher – Philips Hue LED pendant light Beyond, White and Color Ambiance A real eye-catcher over a table – the modern and intelligent LE…. 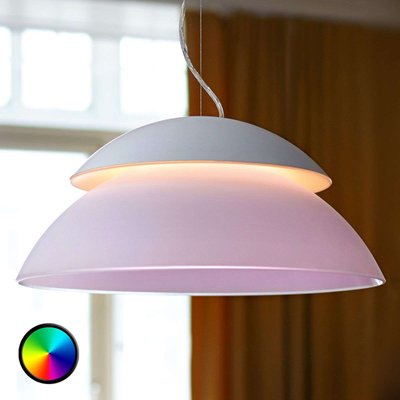 A stylish eye-catcher – Philips Hue LED pendant light Beyond, White and Color Ambiance A real eye-catcher over a table – the modern and intelligent LED pendant light Beyond from Philips comes with two separate light sources. It therefore not only impresses with its design but also with its functionality. The main light source, which is shone evenly and glare-free downwards, is complemented by a small, indirect light source, which provides ambient lighting. Both LEDs can be switched on and off separately from one another so that an individual atmosphere can be created. This is possible by connecting the LED pendant light to an existing Philips Hue smart home system via a Hue Bridge (see the accessories). Thanks to this technology Beyond can be easily controlled, managed and dimmed via the corresponding app. It is also possible to create timed programs for the light to turn on and off so that you can simulate your presence when on holiday. Pre-installed lighting scenarios, as well as your own, can not only be controlled via a smartphone or tablet but also via voice control. The corresponding Philips Hue dimmer switch can also be used as a remote control and dimmer. Special features / compatibility – Can be controlled via the Hue app – Controllable via the Hue dimmer switch (see the accessories) – Compatible with an existing Philips Hue system – Voice control possible with Amazon Alexa, Apple HomeKit (Siri) and Google Assistant – Compatible with ZigBee-based systems such as Innogy, Bosch, Magenta (German Telekom) and Busch-Jäger. – Please note that a bridge, such as the Philips Hue bridge, is needed in order to be able to use the intelligent lighting control functionality. Energy efficiency class:A+
BUY NOW at Lights.co.uk*