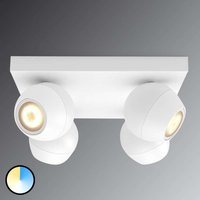 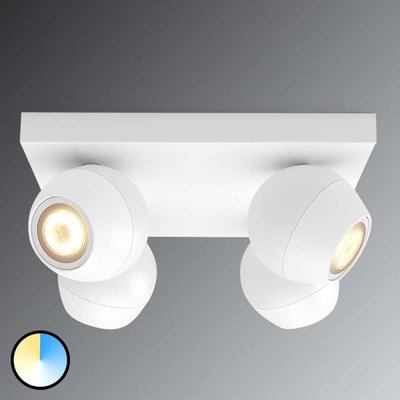 Four-bulb LED ceiling spotlight Buckram Philips Hue White Ambiance The four-bulb Philips Hue Buckram LED ceiling spotlight provides general lighting for a wide variety of rooms. Equipped with the White Ambiance technology, it makes variable lighting in a wide variety of white luminous colours possible. The wireless dimmer switch provided can be used to control the lighting functions. It can be used to turn the light on and off, to dim it and to select one of four pre-set lighting scenarios. The dimmer switch is wireless, can be mounted on the wall or used like a remote control. It can control up to ten Hue lights without the need for a Hue bridge. The four-bulb spotlight can also be integrated into an existing Philips Hue lighting system with the help of a Philips Hue bridge, which is either already present as part of the Philips Hue system or can be ordered as an accessory. The free Philips Hue app is used to connect the light o the system and then control the many functions from your smartphone or tablet. Voice control via e.g. Siri or Alexa is also possible. The dimmer switch can still be used to control the light when it is part of a Hue smart home system. Special features / compatibility – Controllable via the Hue dimmer switch (included) – Dimmable (via app or dimmer switch) – Compatible with an existing Philips Hue system – Can be controlled via the Hue app – Voice control possible with Amazon Alexa, Apple HomeKit (Siri) and Google Assistant – Compatible with ZigBee-based systems such as Innogy, Bosch, Magenta (German Telekom) and Busch-Jäger. – Please note that a bridge, such as the Philips Hue bridge, is needed in order to be able to use the intelligent lighting control functionality. Energy efficiency class:A+
BUY NOW at Lights.co.uk*