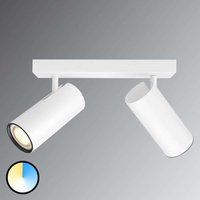 Two-bulb Philips Hue White Ambiance LED ceiling spotlight Buratto in white with a dimmer switch Whether in the living room, hallway or bedroom – the W…. 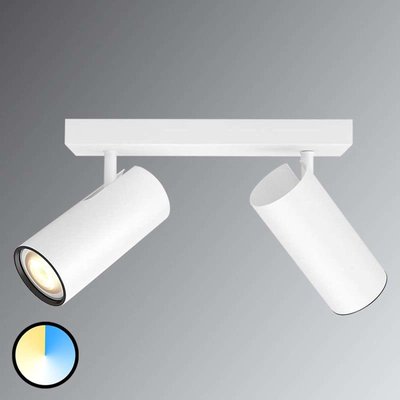 Two-bulb Philips Hue White Ambiance LED ceiling spotlight Buratto in white with a dimmer switch Whether in the living room, hallway or bedroom – the White Ambiance technology enables the two-bulb Philips Hue LED ceiling spotlight Buratto to provide flexible lighting which can always be perfectly adjusted to the situation, time of day, activity etc. The spotlight can be controlled via the dimmer switch provided. In addition to turning the light on and off and dimming it, you can also set one of four pre-programmed lighting scenarios. Another option offered by the Philips Hue Buratto LED ceiling light is integration into an existing Philips Hue system. The prerequisite for this is a bridge which is connected to the WiFi router. The spotlight can now be incorporated into the system via the Philips Hue app and can then be controlled from anywhere via an app on your tablet or smartphone. You can, for example, turn the light on or off whilst you are on the move. Special features / compatibility – Controllable via the Hue dimmer switch (included) – Dimmable (via app or dimmer switch) – Compatible with an existing Philips Hue system – Can be controlled via the Hue app – Voice control possible with Amazon Alexa, Apple HomeKit (Siri) and Google Assistant – Compatible with ZigBee-based systems such as Innogy, Bosch, Magenta (German Telekom) and Busch-Jäger. – Please note that a bridge, such as the Philips Hue bridge, is needed in order to be able to use the intelligent lighting control functionality. Energy efficiency class:A
BUY NOW at Lights.co.uk*