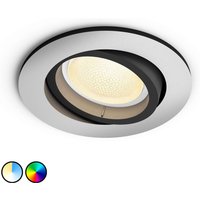 Centura, Philips Hue White and Color Ambiance round LED downlights – controllable via Bluetooth and ZigBee Centura is ahead of the competition, both f…. 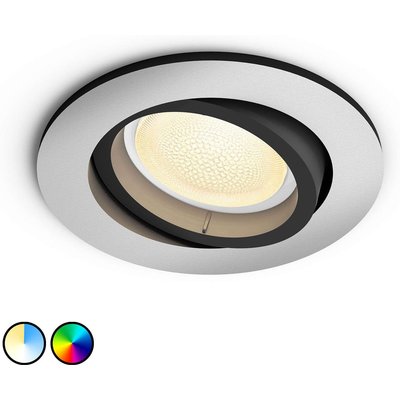 Centura, Philips Hue White and Color Ambiance round LED downlights – controllable via Bluetooth and ZigBee Centura is ahead of the competition, both from an optical and technical point of view. The LED spot for ceiling installation consists of a round aluminium frame and a rotating plastic spotlight. The latter has a GU10 fitting, which is equipped with a Hue White and Color Ambiance lamp. Centura’s different lighting options and control options are one of its highlights. This means that the spotlight can be operated via Bluetooth using the Hue Bluetooth app on tablet or smartphone – without the need for any additional devices. Since communication is also possible via ZigBee, Centura can be integrated into any ZigBee-based smart home system via the bridge and router. If Philips Hue is chosen, the Hue dimmer switch can be used to control the device on-site or the Hue app can be used for remote control via the smartphone. Centura can also be integrated into Google Home, Amazon Alexa or Apple HomeKit to be controlled via voice control. With 16 million colours and white tones from 2,000 to 6,500 kelvins, Centura has the right option to suit every preference and every situation. The settings can be selected according to pre-defined light solutions, freely assembled, and after integration with ZigBee for example, determined according to your daily schedule or when you will be in the room. Technical data: – Energy efficiency class A+ – The white light can be set from warm white (2,000 K) to daylight (6,500 K) – 16 million colours – Bluetooth range indoors ca. 10 m Special features / compatibility: – Can be controlled via the Hue dimmer switch (see the accessories) – Controllable via the corresponding Hue app and Hue Bluetooth app – Compatible with an existing Philips Hue system and other ZigBee-based systems such as Innogy, Bosch, Telekom (Magenta) and Busch-Jäger – Voice control possible with Amazon Alexa, Apple HomeKit (Siri) and Google Assistant – Dimmable via app, voice command and dimmer switch – Intelligent lighting control option a: ZigBee integration via bridge and routers such as the Philips Hue Bridge (see the accessories); this allows for on-site or remote control via a Hue app (free for Android and iOS) or on-site control via voice command using Amazon Alexa, Apple HomeKit (Siri) and Google Assistant. – Intelligent lighting control option b: direct on-site control via Bluetooth using a free Hue Bluetooth app; this requires a smartphone or tablet that uses Android 7 or iOS 11 or higher and Bluetooth Low Energy (BLE) 4.0 or higher. A router, WiFi or data connection is not required. The use of a bridge is recommended when using more than ten lights. A light can store connections with up to 15 smartphones/tablets; the individual settings are assigned individually. Energy efficiency class:A++
BUY NOW at Lights.co.uk*