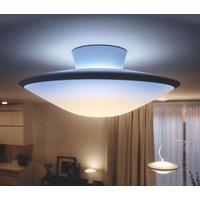 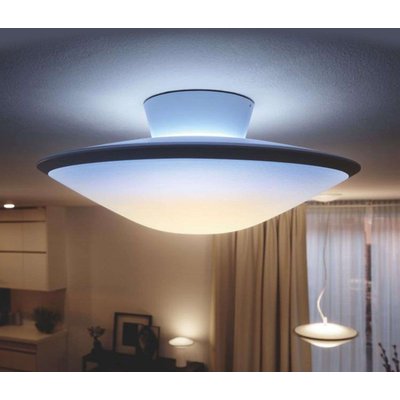 Philips Hue White Ambiance LED ceiling light Phoenix – controllable with or without an app The Phoenix ceiling light from Philips Hue has two integrated and independent LED light sources, which can be controlled separately or together. They provide an indirect uplight and a direct downlight. Both LEDs are able to generate almost 50,000 shades of white within the spectrum of warm white to daylight. Phoenix has a special surface with a hexagonal pattern, which creates a pleasant, almost sparkling lighting effect and gives the light additional flair. The dimmer switch provided can be used as a remote control or wall switch. It can be used to switch the light on and off, to dim it seamlessly or to set one of the four available lighting scenarios, such as reading or energy. It isn’t possible to dim the light via the existing house installation. In order to be able to use the full functionality of the Phoenix LED ceiling light, it needs to be connected to an existing Philips Hue system with a Hue bridge (see the accessories). The light can then be controlled via the corresponding Hue app or a compatible voice assistant. The timer function can be used to automatically switch the light on and off at specified times as well as to be notified of incoming messages, such as calls or social media updates, via a light signal. Special features / compatibility – Controllable via the Hue dimmer switch (included) – Compatible with an existing Philips Hue system – Can be controlled via the Hue app – Voice control possible with Amazon Alexa, Apple HomeKit (Siri) and Google Assistant – Compatible with ZigBee-based systems such as Innogy, Bosch, Magenta (German Telekom) and Busch-Jäger. – Please note that a bridge, such as the Philips Hue bridge, is needed in order to be able to use the intelligent lighting control functionality. Energy efficiency class:A+
BUY NOW at Lights.co.uk*