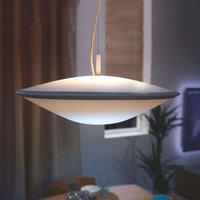 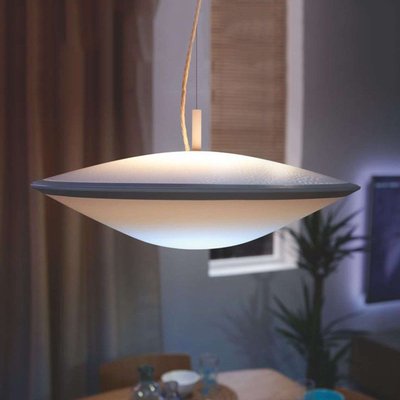 The right light for every situation with Philips Hue White Ambiance Phoenix LED pendant light The Phoenix pendant light from the Philips Hue portfolio is a modern hanging light with intelligent LEDs. Phoenix not only impresses with its minimalist and futuristic design but also with its excellent functionality. The surface of the light has a hexagonal pattern, which creates a dynamic and atmospheric lighting effect. The LEDs inside the light have a variable luminous colour ranging from warm white to daylight so that suitable light for every mood can be provided. Whether you want to relax, read or concentrate on something – Phoenix provides exactly the light you need. To be able to control all the functionality of the LED pendant light, it needs to be connected to an existing Philips Hue smart home system via a Philips Hue bridge (see the accessories). Once connected the light can be switched on and off, dimmed and managed via the corresponding Hue app. In addition to the different white luminous colours and pre-installed lighting scenarios, you can also create timed programs or control the Phoenix pendant light whilst on the move via your smartphone. The light can be dimmed without any further installation needed via the app as well as via voice control or dimmer switch. The latter is included and can be used as a remote control or as a wall switch with no need for a Philips Hue smart home system. Special features / compatibility – Controllable via the Hue dimmer switch (included) – Compatible with an existing Philips Hue system – Can be controlled via the Hue app – Voice control possible with Amazon Alexa, Apple HomeKit (Siri) and Google Assistant – Compatible with ZigBee-based systems such as Innogy, Bosch, Magenta (German Telekom) and Busch-Jäger. – Please note that a bridge, such as the Philips Hue bridge, is needed in order to be able to use the intelligent lighting control functionality. Energy efficiency class:A+
BUY NOW at Lights.co.uk*