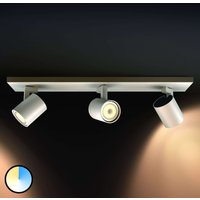 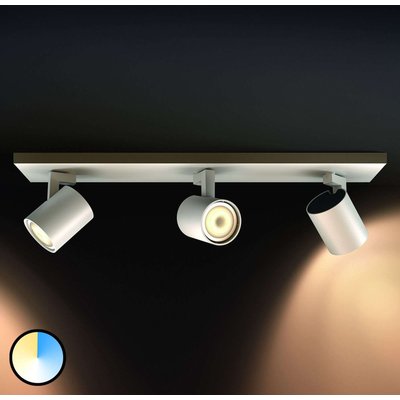 Versatile Philips Hue LED spotlight Runner with three rotatable and pivotable LED spotlights and a practical dimmer switch The Runner LED ceiling spotlight consists of a white, linear metal body with three cylindrical LED spotlights, which come with three White Ambiance GU10 LED bulbs. The bulbs have the innovative ZigBee standard so that the light can be connected to a smart home system. Once connected to a compatible system via a bridge (see the accessories), the Runner ceiling light can be controlled by the complimentary Hue app or via a compatible voice assistant. White tones within the spectrum of warm white to daylight can be individually set and timed programs created so that the right light is always available. The Runner three-bulb spotlight can also be controlled on the move via the app. Should you wish to control the light without an Internet connection, this is possible via the Hue dimmer switch provided. It can be used to switch the light on and off as well as to dim it. It is also possible to change the white tone. Four pre-programmed lighting scenarios can also be selected – relaxation, energy, concentration or reading. When the dimmer switch is part of a smart home system, its buttons can also be individually programmed. Special features / compatibility – Controllable via the Hue dimmer switch (included) – Dimmable (via app or dimmer switch) – Compatible with an existing Philips Hue system – Can be controlled via the Hue app – Voice control possible with Amazon Alexa, Apple HomeKit (Siri) and Google Assistant – Compatible with ZigBee-based systems such as Innogy, Bosch, Magenta (German Telekom) and Busch-Jäger. – Please note that a bridge, such as the Philips Hue bridge, is needed in order to be able to use the intelligent lighting control functionality. Energy efficiency class:A
BUY NOW at Lights.co.uk*