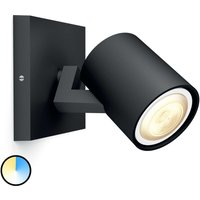 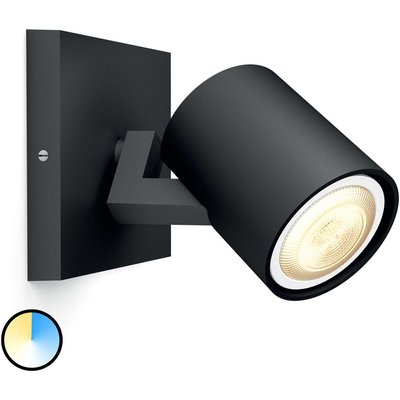 With a practical dimmer switch for controlling the light – Philips Hue LED spotlight Runner The Philips Hue LED spotlight Runner is made of robust metal which has been painted black. The frame and short arm to which the pivotable head is attached are angular in shape, whereas the pivotable head itself delights with its cylindrical shape. A replaceable Philips Hue White Ambiance GU10 LED bulb sits inside the head of the light. It provides plenty of light and, thanks to its innovative ZigBee technology, can be connected to an existing Philips Hue smart home system. To be able to control the spotlight via smartphone, tablet or voice assistant, it needs to be connected to a Hue bridge. Once connected the light can be controlled, dimmed and set to various white tones via the Hue app, which is free of charge. Many different lighting scenarios can be created within the spectrum of warm white to daylight so that the light provides the right atmosphere for every time of day. The Hue dimmer switch provided not only functions as an additional control element and as an alternative to the smartphone but can also be used without an Internet connection or Philips Hue system to control the Runner LED spotlight. The switch can be used to switch the light on and off, dim it or set one of four pre-programmed lighting scenarios – even in offline mode. Special features / compatibility – Controllable via the Hue dimmer switch (included) – Dimmable (via app or dimmer switch) – Compatible with an existing Philips Hue system – Can be controlled via the Hue app – Voice control possible with Amazon Alexa, Apple HomeKit (Siri) and Google Assistant – Compatible with ZigBee-based systems such as Innogy, Bosch, Magenta (German Telekom) and Busch-Jäger. – Please note that a bridge, such as the Philips Hue bridge, is needed in order to be able to use the intelligent lighting control functionality. Energy efficiency class:A
BUY NOW at Lights.co.uk*