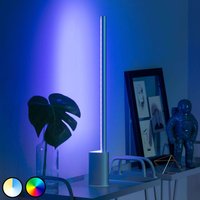 Philips Hue Signe table lamp with RGBW LEDs for smart control via ZigBee and Bluetooth Signe is anything but an ordinary table lamp. It gives you the …. 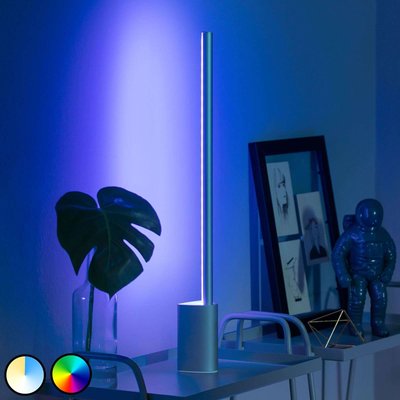 Philips Hue Signe table lamp with RGBW LEDs for smart control via ZigBee and Bluetooth Signe is anything but an ordinary table lamp. It gives you the ambience you want – be it during the day, for a cosy evening in front of the TV, when playing computer games or at a great party – with whatever brightness you want, with warm white to daylight or coloured light. The light, designed as a slimline bar, visually blends into the background. The smartphone or tablet is already sufficient to operate the lamp with the Hue Bluetooth app. Signe can also be operated by the Hue dimmer switch (see the accessories). The unlimited possibilities for voice control with different systems, remote control via the smartphone app and creation of scenes with other smart devices can be achieved by integrating the lamp with Philips Hue or other ZigBee-based smart home systems using a bridge and router. Technical data: – Energy efficiency class A – The white light can be set from warm white (2,000 K) to daylight (6,500 K) – 16 million colours – Bluetooth range indoors ca. 10 m Special features / compatibility: – Can be controlled via the Hue dimmer switch (see the accessories) – Controllable via the corresponding Hue app and Hue Bluetooth app – Compatible with an existing Philips Hue system and other ZigBee-based systems such as Innogy, Bosch, Telekom (Magenta) and Busch-Jäger – Voice control possible with Amazon Alexa, Apple HomeKit (Siri) and Google Assistant – Dimmable via app, voice command and dimmer switch – Intelligent lighting control option a: ZigBee integration via bridge and routers such as the Philips Hue Bridge (see the accessories); this allows for on-site or remote control via a Hue app (free for Android and iOS) or on-site control via voice command using Amazon Alexa, Apple HomeKit (Siri) and Google Assistant. – Intelligent lighting control option b: direct on-site control via Bluetooth using a free Hue Bluetooth app; this requires a smartphone or tablet that uses Android 7 or iOS 11 or higher and Bluetooth Low Energy (BLE) 4.0 or higher. A router, WiFi or data connection is not required. The use of a bridge is recommended when using more than ten lights. A light can store connections with up to 15 smartphones/tablets; the individual settings are assigned individually. Energy efficiency class:A
BUY NOW at Lights.co.uk*