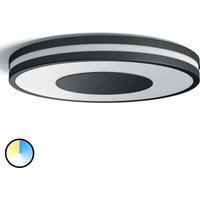 Philips Hue White Ambiance LED ceiling light Being in trendy black with an innovative design A wide variety of lighting scenarios can be produced with…. 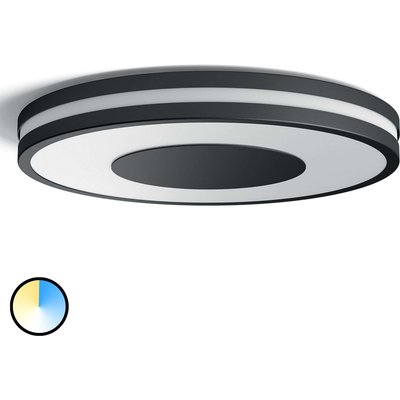 Philips Hue White Ambiance LED ceiling light Being in trendy black with an innovative design A wide variety of lighting scenarios can be produced with this Philips Hue LED ceiling light to give the room the perfect ambience. You can determine the luminous colour or the brightness of the LEDs as the mood takes you, allowing everyone to decide for themselves what kind of light they want. The built-in ZigBee standard allows the light to be integrated into an existing smart home system with the help of a Hue bridge (not included, but available as an accessory). The light can then be easily controlled via an app, even when you are on the move as the light is in constant contact with the local WLAN router via the bridge. There is even a convenient solution for those who would simply like to control the light. The dimmer switch provided can be used to select and save a number of settings, without the need for an existing smart home system. The light can be switched on and off as well as dimmed via the switch. The dimmer switch can, however, also be incorporated into the Hue system via the bridge and then used as an additional control unit. Special features / compatibility – Controllable via the Hue dimmer switch (included) – Compatible with an existing Philips Hue system – Can be controlled via the Hue app – Voice control possible with Amazon Alexa, Apple HomeKit (Siri) and Google Assistant – Compatible with ZigBee-based systems such as Innogy, Bosch, Magenta (German Telekom) and Busch-Jäger. – Please note that a bridge, such as the Philips Hue bridge, is needed in order to be able to use the intelligent lighting control functionality. Energy efficiency class:A+
BUY NOW at Lights.co.uk*