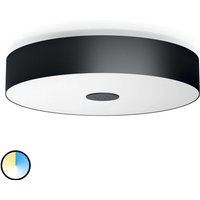 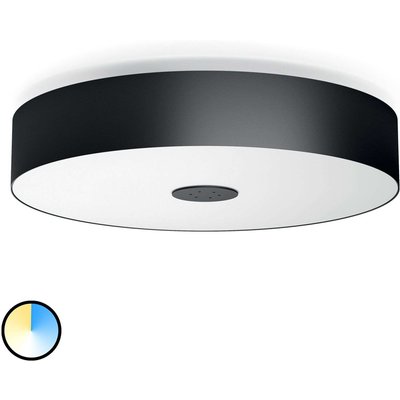 Philips Hue LED ceiling light Fair with a timeless design and a practical dimmer switch The Philips Hue Fair LED ceiling light not only creates unique lighting moments in the room but is also particularly versatile as it can be used anywhere in the home thanks to its timeless design. It has a round metal body with a satin-finished plastic lampshade which contrasts appealingly with the black-painted metal frame. The light is generated by powerful LEDs on the inside and shines through the satin-finished plastic lampshade homogeneously and glare-free. Due to the fact that the light comes with the innovative ZigBee standard, it can be integrated into an existing Hue smart home system so that it can be conveniently controlled via tablet or smartphone. Prerequisite is a Hue bridge (see the accessories). Alternatively, the light can also be controlled via the dimmer switch provided, which communicates with the light via Bluetooth. It comes with four pre-programmed lighting modes, which can be easily selected. It is also possible to switch the light on and off as well as dim it. Special features / compatibility – Controllable via the Hue dimmer switch (included) – Dimmable (via app or dimmer switch) – Compatible with an existing Philips Hue system – Can be controlled via the Hue app – Voice control possible with Amazon Alexa, Apple HomeKit (Siri) and Google Assistant – Compatible with ZigBee-based systems such as Innogy, Bosch, Magenta (German Telekom) and Busch-Jäger. – Please note that a bridge, such as the Philips Hue bridge, is needed in order to be able to use the intelligent lighting control functionality. Energy efficiency class:A+
BUY NOW at Lights.co.uk*