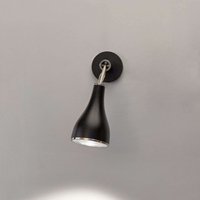 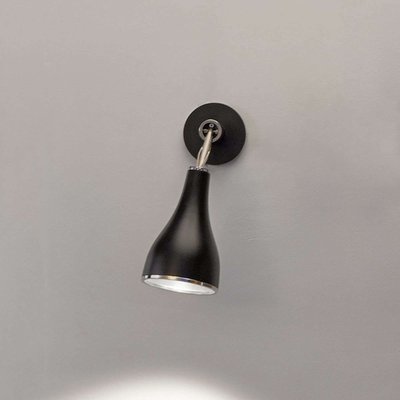 Highly flexible One Eighty wall spotlight made from black aluminium The One Eighty wall spotlight manages to change the direction of its light and to move its body into almost any position in a way that is both fascinating and downright acrobatic. One Eighty starts from a point that most other lights fail to reach at all. The wall spotlight is made from robust, black painted aluminium. It doesn’t seek to conceal its technical components; instead it boldly displays what it holds within. Thus the extraordinary connecting pieces between the assembly plate and the lamp head are in full view. One Eighty also reveals it functionality: a precise pivot and swivel mechanism that lends the spotlight its unbelievably flexibility. A 90 degree pivot in both directions combined with rotation by 350 degrees – this is a wonderful amount of adaptability. It doesn’t matter how remote the corner of the room that is to be illuminated nor which inaccessible angle the picture is positioned in relation to the light, One Eighty illuminates its target precisely and without compromise. The brightness of the spotlight can be adjusted using an external dimmer. The high-quality wall spotlight focuses on a very direct light with lateral shielding to perfectly illuminate the area in question. The elegantly shaped lamp head broadens towards the light outlet to perfectly direct the lighting. The combination of the largely black surface and the nickel-plated trim rings creates an attractive and timeless colour contrast. One Eighty is an exceptional, flexible and modern light and one that can be used to enhance private homes, commercial spaces, shops and department stores. It is suitable for us as both a wall light and a ceiling light. One Eighty is an award-winning masterpiece. In 2010 the light was awarded the Red Dot Design Award, and it was nominated for the German Design Award in 2011. Energy efficiency class:D
BUY NOW at Lights.co.uk*