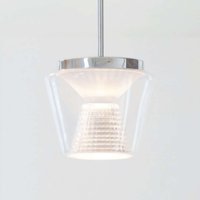 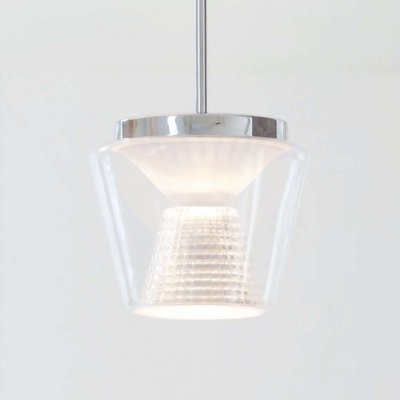 Hand-blown glass lampshade with crystals: Annex LED designer pendant light The Annex LED pendant light, which has been designed by Frankfurt product designer Uwe Fischer, offers decorative and functional lighting. The outer lampshade is made from clear, hand-blown glass and forms the decorative shell for the inner lampshade, which serves as a reflector and is made from cut crystal glass. It serves to direct the majority of the light emitted by the COB LEDs downwards, whilst also allowing part of the light to shine around the light to great decorative effect. Using cut crystal glass as a reflector also creates very decorative lighting for the surroundings – the light is broken up into a thousand pieces to sparkle and shine and create a decorative pattern on the wall and ceiling. The pendant light is very user-friendly and functional. It can be dimmed using a leading or trailing edge dimmer (not included). The light glass is also easy to install thanks to the bayonet fastener. Annex is distinguished from many other pendant lights by the fact that it does not hang from a cable or cord; instead it hangs from a rod. The Annex LED pendant light represents an aesthetically pleasing and functional option for general lighting in hallways – whether in the home or in a hotel – or to illuminate a counter or bar. Energy efficiency class:A+
BUY NOW at Lights.co.uk*